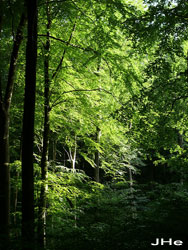 Klinteskoven is the large beech wooded area behind Møns Klint.

Under the gnarled beech trees you will find Møns highest spot and it is Aborrebjerget with its 143 meters.
Below Aborrebjerget lies the valley of Jydelejet with its unusual landscape of fringe-vegetation (juniper, rowan, ash and beech). Just behind Aborrebjerget lies a big stone called "Svantese-stenen". The legend tells us that a witch from Rügen hated the chiming from the bells of Magleby Church so much that she picked up a stone from the beach and with the help of her garter she slung it against the church. The stone only hit one of the two towers of the church and landed in Klinteskoven.

Many ancient monuments are also to be found in these woods. Barrows and passage graves were well hidden from the first peasants and even the remains of two strongholds with ramparts and moats from the last period of antiquity are to be found here. 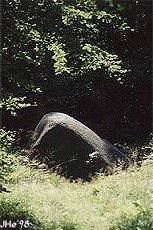 The soil's high amount of chalk is the reason why you can find up to 20 different types of wild orchids in Klinteskoven. Most of the orchids are rare and on the edge of extinction. All vegetation in Klinteskoven is protected by law and therefore it is not allowed to pick or dig up any kind of vegetation there.

There are many stories about trolls and witchcraft in Klinteskoven, but one of the most important figures must be the Giant Upsal, better known as Klintekongen - King of the Cliff. The villagers seldom went near Store Klint because it was said to be his kingdom.

Klinteskoven originally belonged to Klintholm Manor but in 1980 the Danish State bought the whole Chalk Cliff and parts of the woods. 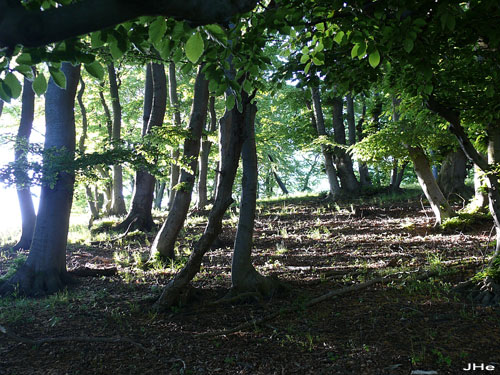