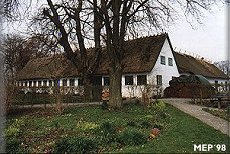 "Museumsgården" is an old four-winged, thatched, half-timbered farm which history dates back to the time when farms were moved from the villages out to the fields - about the year 1800.

The same family lived here for generations until the last owner Hans Hansen died in 1964.
Hans Hansen which was very much interested in history, left in his will the furniture's which could be in some sort of interest to the national museum (Nationalmuseet). But the national museum did however preserve the farm in its entirety, so the following generations could see, what life was like in the 19th century amongst the peasants of Møn. 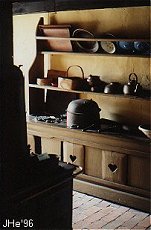 The museum has been open to the public since 1968 and so has its beautiful garden. The museum has opened from May to October, the garden is always open for a visit.

During the summer marked-days will be arranged at the farm, with lots of activities and things to buy, you can see traditional ways of making butter, mustard, baskets, blacksmiths will be at work etc.