Bronze-age Mounds is highly represented on Møn: 200 in total, whereof 125 is smaller ones.

During the Bronze-age (1700 - 500 BC) the already existing graves were reused but also new ones were build:
Between the period 1500 - 1000 BC the graves were big mounds with a single grave in the middle, usually a hollowed oak-tree was used as a coffin.These big mounds can be seen in Klinteskoven, Stupperup Have, Lilleskov and at Fanefjord.
Between the period 1000 - 500 BC the graves got smaller and the dead was cremated and put in urns (urn graves), the burial deposits also became smaller. The graves could be encircled by stones and it is not unlikely to find a Menhir near the mound. These types of graves can be found in Klinteskoven, Busene Have (including a Menhir). It is also around this time sacrifices becomes more common, jewellery and weapons are put in mosses. 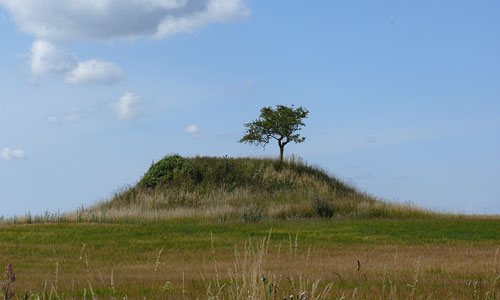 Busene Have. 8 mounds. Bauta-stones (Menhirs), Stone setting from the Viking-age.