Passage graves are graves with usually one big rectangular grave-chamber, from the east a narrow and low passage leads into the chamber itself. The graves are covered with a mound. The Graves were mass-graves: they were often used by an entire family or a village and was re-opened every time a member died.

With a life time of over 4000 years, this big mound is not only one of the most beautiful ancient monument in the country but it is also one of the biggest passage graves in Denmark. 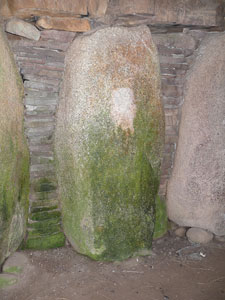 Kong Asgers Høj is situated to the Northwest of Sprove on a small hill. The passage grave is open to the public, but it is a good thing to bring some sort of light because the grave chamber is pitch-dark.

To the left you see Tørmuren -"the dry wall" in between the massive stones in the wall.

About 100 meters to the south you will find a beautiful burial mound. Don´t miss if you visit Kong Asgers Høj. Here you can read more about Sprove Dysse.

"Klekkende Høj" is a very special passage grave because of its double burial chamber and its two entrances which lies right besides each other.

The grave was build about 2500 B.C. as one big chamber and was divided by one or two stones when finished and that is very unusual. The entrances are about 7 meter long and the depth´s of the chambers are about 4,5 meters.

This burial chamber was like "Kong Asgers Høj" used as a common grave and many bodies were buried inside it.

The chamber was excavated in the later part of the 18th century by the Lord-in-Waiting of Marienborg - Antoine de Bosc de la Calmette. Calmette was very much interested by archaeology and got his house administrator and 14 of his day-working peasants to excavate the grave. They worked for 8 days, starting from the top with removing the earth. When they reached the cover-stones they raised two of them sideways, it was hard work but the peasants were used to that.
Inside they found a great amount of human bones, weapons of flint, ornamented clay-vessels and pearls of amber. All the finds were sent to the newly established National Museum in Copenhagen in the year 1807.
After all the finds had been removed, the chamber was closed again from the top and the mound was rebuild.
This excavation was one of the first real archeological researches made in Denmark!

The chamber is 10 meters long and is 2,5 meters wide with the characteristic narrowing on the middle. The entrance is 8 meters long.

"Jordhøj" is situated 3 kilometres from Stege and is visible from the road Grønsundvej.

The path to the grave is overgrown with hawthorn-bushes, and only the top of the entrance is visible. It is possible to enter the chamber but only with some difficulty. If you enter the gravechamber remember a lightsource and look out for the rock that sticks out from the ceiling so that you don´t bump you head into it. 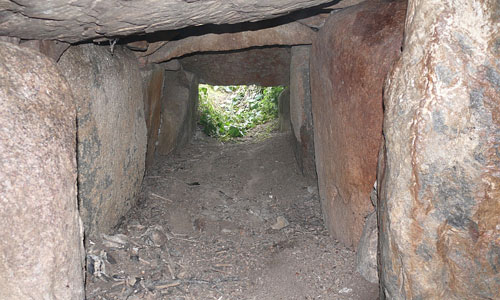 The chamber is 9 meters long and 2 meters wide and was excavated in the year 1853 by one of the country's leading archaeologist, J.J.A. Worsaae. 15 buried persons were found during this excavation and pieces from 40 different earthenware pots. It was also protected by law in 1853.

The gravechamber lies in a northeast/southwest positionen and is fully covered by a mound. The entrance is 7 meters long and southeast oriented. The cover stones are missing on the outer part of the entrance. The gravechamber is covered with 6 enormous coverstones the biggest weighs up to 15 tons. The space between the borderstones are filled with smaller stonechips kalled a Dry-Wall (Tørmur).

This Passage Grave was build about 3200 BC. The stones weighs up to 10 tons and were moved and lifted by rollers, sledges and lifting bars when constructed.

Text and photos contributed by J.Henkel

Other Passage graves on Møn, but without any additional information:

"Fuglehøj Jættestue", Southwest of Lille Bissinge. Passage Grave.
A supposed Passage Grave though it only looks like a Mound with two incomplete rows of a few stones each, giving the impression of a Long Barrow. (Observation by J.Henkel)