Cairn Chambers are round barrows where the covering mound has been removed or has naturally disintegrated. There chambers was used for only one burial and is made out of usually 3-4 pillar stones and one cover stone.

North of Grøn Jægers Høj or better known as Grønsalen, on a field east of Fanefjord Church near Vollerup, there is a well preserved cairn consisting of three pillar stones with lower brink stones and a large cover stone. The mound as well as the border stones were removed during the last century. 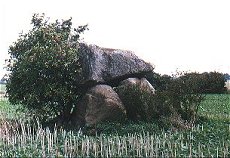 Another beautiful cairn is standing near Ålebæksgård on the slope of the hill, Lisebjerg. It has rectangular burial chamber which has been lying there with its cover-stone set aside for many years. When the cover-stone was moved back in place closer inspection revealed lots of prehistoric items in the grave. 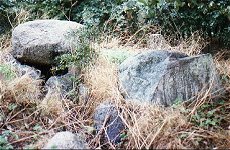 West of Råbymagle, north of the way to Råbylille, there is a large cairn with massive pillar stones and a large domed cover stone. 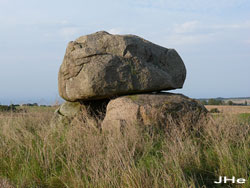 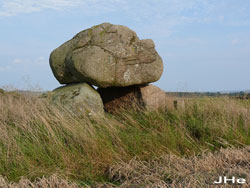 Originally this was a long barrow, people tell about two rows of stones in relation to this grave but they have been removed.
This cairn is Møns largets stand-alone cairn. Its size and its exposed position makes it a real landmark, which can be seen from far distances. 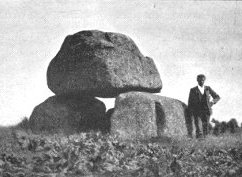 Picture taken from the book:"Af Møns Historie" by F.Bojsen from 1905.
There is no referral to who took the picture, and if anyone object having the picture on this homepage, let me know and it will be removed.

This is a quite interesting mound with more than one function. It was not only a burial chamber but was also used for more magical purposes.

Besides its gigantic cover-stone over the big octagonal chamber, it has about 200 cup-shaped holes scooped out on the cover-stone of the entrance. These holes are believed to be sacred magical signs in a fertility-cult active in the Bronze Age.

"Sømarkedyssen" is situated near Magleby on the eastern part of Møn.

Picture taken from the book:"Af Møns Historie" by F.Bojsen from 1905.
There is no referral to who took the picture, and if anyone object having the picture on this homepage, let me know and it will be removed.

About 100 meters to the south of "Kong Asgers Høj" near Stenagergård you will find an well preserved burial mound with 7 base-stones, 2 coverstones with similar cup-shaped holes as on Sømarkedyssen, a small entrance and 35 big stones around the mound. 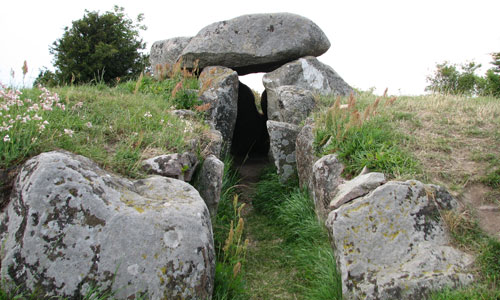 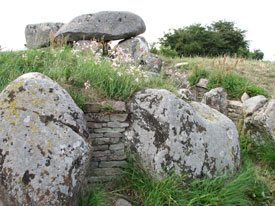 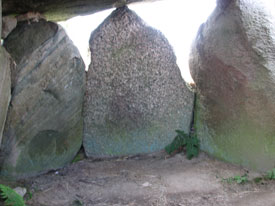 This burial mound is situated in an almost inaccessible hedgerow between Sprove and Røddinge Husrække. A large coverstone lies on a burial chamber in the ground and a few border stones surrounds the small mound.

On the roadside between Røddinge and Store lind lies one of Møn´s smallest graves. There is just one coverstone left, lying on a burial chamber in the ground. This is probably one of the graves which have been raided to collect the stones for the fake Long barrow in Marienborg Park 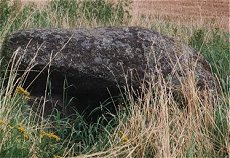 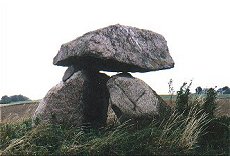 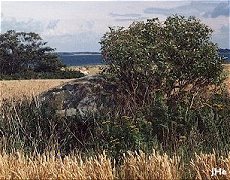