Ulvshale is the peninsula to the north of Møn. Here you will find a somewhat special forest, salt meadows, a moor, an old entrenchment and one of Denmark's best bathing beaches. 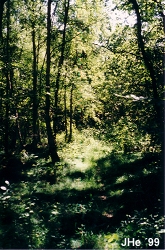 Ulvshale forest ("Wolfs-tail Forest") does not look like any other forest in eastern Denmark. Big parts of the forest is allowed to grow freely and naturally without any interference from humans such as lodging and planting.
Only the paths are kept open from vegetation and fallen branches.
In other parts of the forest a gentle lodging is allowed in order to preserve the character of the forest.

Ulvshale forest has a varied vegetation and many of Denmark's natural tree sorts are to be found here such as beech tree, birch, witch-elm, aspen, ash tree, hornbeam, common alder and rowan.

The forest also contains the country's biggest and most healthy stand of lime trees with small leaves. Oak is however the most common tree in Ulvshale forest.

Under the trees magnificent crowns the vegetation is just as varied. Bracken, ivy, alder buckthorn, hawthorn, crab apple tree, blueberry and blackberry are all to be found in the forest.
Where the light reaches the ground some interesting smaller plant are growing such as: lily of the valley, May-Day flower and wood anemone. 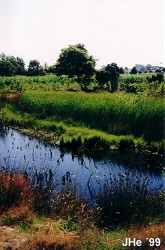 Both to the north and to the south of the Ulvshale forest lies big salt meadows. The one to the north is called "Fällesgräsningen" and the ones at the south is called "Horsnäs Enge" and "Vedelen". These meadows are together with the big meadow at Nyord important breeding grounds for many different birds.
The salt meadows are rich in wading-birds, ducks, herons and many birds of passage use it as a resting place before taking of to their final destination.
The nothern meadow once were a common grasing field. The small cottage you'll find at the outskirts of the area were the herds home.

To make the meadows as good resting and nesting places as possible it is necessary to keep the vegetation down - and that is done by cows and sheep.
When the grass is low the birds has a good view over the meadow and feels secure. 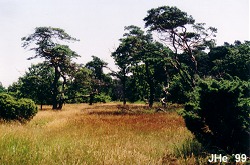 South of the Ulvshale forest lies a big heather area called "Heden". This Place is dominated by heather and juniper, but there is also places where you can find cotton-grass and the insectivorous sundew.
The moor is also the home of the rare black adder.
To the north of Ulvshale Forest lies a smaller moor where you will find an old entrenchment. 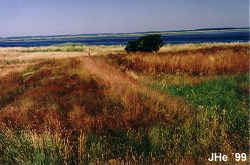 On the north-western tip of the peninsula lies the old entrenchment "Skansen" as a reminder of the war against England in the last century.
Between 1807 and 1814 the militia of Møn guarded here so that they could look out for the English ships. The strong current forced the English ships to sail close to the shore and therefore made them an easy target to the Danes cannons.

Ulvshale north-east coast is one of Denmark's best bathing beaches.
A wide sandbeach with dunes right behind it and clean bathing water right infront...