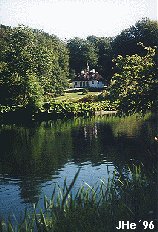 This Beautiful garden was once a part of Klinteskoven, but Gérard Antoine de Bosc de la Calmette and his wife Catharina Elisabeth Iselin, called Lisa, transformed the forest into a naturally looking garden with lakes and interesting buildings.

In the year 1783 Antione de la Calmette the owner of Calmettenborg (Marienborg today) and his wife Lisa bought Sømarkegården and a part of Klinteskoven. Inspired by their trips around Europe and the ideas of Rousseau, they transformed the forest behind the old castle into a beautiful garden with interesting buildings scattered around it.

Antoine was very much interested of architecture and build a small romantic castle "Liselund Slot", a Schweizer Cottage "Schweizerhytten", a Norwegian House "Norskehuset", and a Chinese Pavilion. 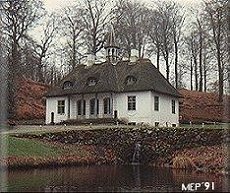 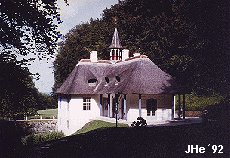 The small castle "Liselund Slot"was build in the years 1792-93 and was designed for shorter visits with few and simple furniture's. 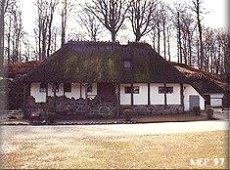 "Schweizerhytten" was originally the gardeners residence. From the house he had a good overlook over the garden. 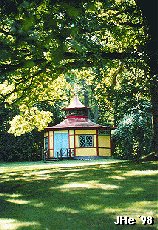 The Chinese Pavilion was build in the year 1800 used as a place were one could relax, maybe with a cup of exotic tea. 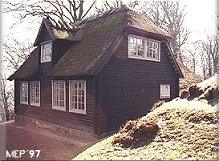 "Norskehuset" was used as a guesthouse.

The new castle in Liselund is now used as a hotel and has the honeymoon-suite in the tower.

The above mentioned buildings are all to be seen today, but there has also been a chapel, a bathhouse, a ruin, and a Klintekors (chalk crucifix) in the garden, but they did however unfortunately disappear in the ocean along with a big part of the chalk cliff in the year 1905.

It is also said that Lisa still keeps an eye on the place, in the shape of a white Lady. 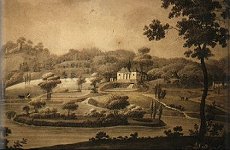 The world famous author H.C. Andersen was one of many who visited Liselund. He stayed in "Schweizerhytten" and it is said that he got the inspiration to write "Fyrtøjet"- "The Tinder Box" by looking at an old hollow beechtree which stood right outside the cottage.